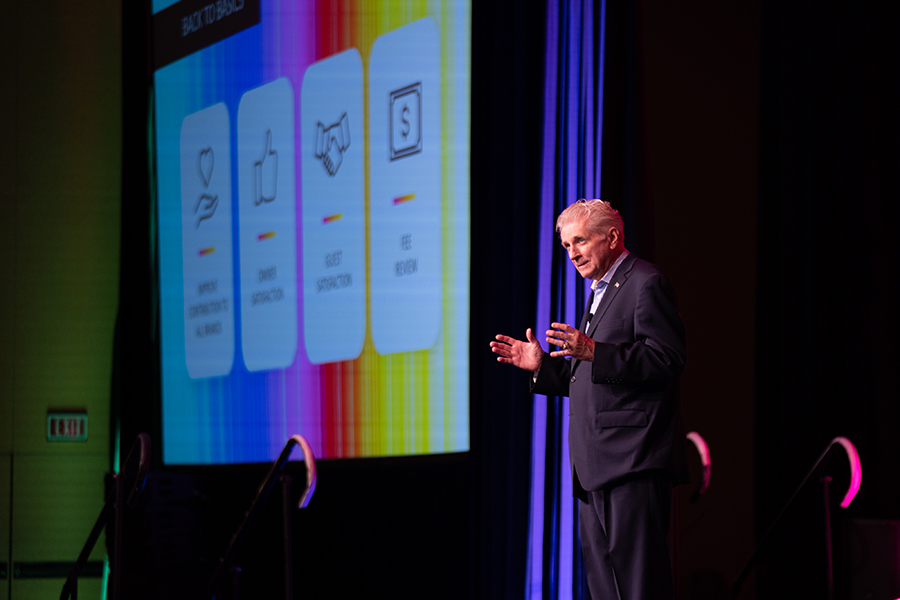 One last hurrah. That’s what attracted John Russell to the interim CEO spot at RLH Corp. in December, and then the permanent spot at the beginning of June. And what a hurrah it’s been.

Russell took over after former President and CEO Greg Mount resigned in November, stepping down from both his leadership roles as well as from the company’s board of directors after a challenging year that saw the company post a net loss of $19 million.

“One of the reasons I wanted to take this opportunity was I wanted to do one more big thing,” Russell said. “It is a publicly owned company and you’d like to be part of turning it around and you think that you’ve got the experience. I guess every opportunity I’ve had, you always question yourself: ‘Can I do it?’ And this happened to be that. I said, ‘Let me try one more time to do one big thing and make a difference.’”

Foot in the Door

Making a difference has been a common theme throughout Russell’s life and career. The Delaware native was appointed to West Point, graduating from the United States Military Academy in 1969 with a degree in general engineering—the only degree offered at the time. He followed that up with a five-year military stint in Germany and Vietnam. Deciding against becoming a career officer, he went to work with an executive search firm that helped military officers exiting the military find jobs in the business community.

“My first job with them was to set up conferences, like job fairs, for officers in different areas around the country,” he said. “Part of my job was to select hotels and put the agenda together and work with the hotels for the food and beverage and the meetings.”

A year later, Sheraton came knocking, offering him a job at the 1,500-room Sheraton Park in Washington, D.C., as a sales executive. (Funny story: Well-known industry exec Bill Hanley hired Russell on a probationary basis because he wasn’t sure a military guy would fit into the hospitality industry, Russell said. Russell ended up hiring Hanley himself about 15 years later).

Since getting his foot in the hospitality door, Russell has gone on to compile an impressive list of industry positions at ITT Sheraton; Days Inn of America; Carlson Companies; Benchmark Hospitality; HFS; Cendant; RCI; Yesawich, Pepperdine, Brown and Russell; Nylo Hotels; Modo Hotels; and CampusBrands. He also served a 16-month stint as SVP of guest experience, education and development at the Georgia Aquarium (working alongside another industry luminary, Mike Leven) and served as senior advisor for Ocean Visions, a group that launches companies that find solutions to problems with oceans. Russell also is a past chairman of the American Hotel & Lodging Association and the Hospitality Sales Marketing Association International.

His most recent position before RLH was as president and COO of management company Sentry Hospitality.

“I had to be at the right place at the right time,” he said about his wide range of experiences, which includes sales and marketing, advertising, public relations, operations development, franchising, real estate and timeshares. “I love challenges. I like to try new things and learn and be relevant and reinvent myself sometimes.”

Russell actually interviewed for the RLH CEO position in 2014 but didn’t get the job. This time around, he got a call from James Evans, former RLH interim CEO and member of the company’s board of directors (and former Best Western president and CEO) asking Russell to help the company navigate through some issues it was having.

“They were in some financial difficulties and they had just acquired over two years two large franchise companies, [Knights Inn and Americas Best Value Inns],” he said. “He felt they needed some guidance in the areas of franchise infrastructure and leadership.”

After meeting with the board, it was a done deal and Russell didn’t waste any time making significant changes to turn performance around. One of his first moves was refocusing the business as a pure franchise company, followed by launching an initiative called ROAR:

R: Recruit new franchises and sell to your existing franchise base.

O: Open as quickly as possible so that everyone involved can make money.

A: Add programs that increase revenue to the franchisee and/or decrease expenses so they’re more profitable.

R: Retain. “This last one is probably the most important,” Russell said. “Give the franchisee owner a reason to, when their contract comes up for renewal or a window that they want to stay in the system, that they feel they’re getting a return on investment.”

According to Russell, the moves were working, and then the world changed in a heartbeat.

“We had a great January and February, and the first two weeks of March were going great,” he said. “And then the pandemic hit and we had to readjust. And we, like every other company, had to do some deep soul-searching or company searching, and we had to reduce our staff by 48 percent. We’re now building some of it back to be sure we can align economically with what’s going on.”

Russell is taking it all in stride, as befits his military background, and that West Point start still guides him in his business life all these years later in the form of SMEAC: Situation, Mission, Execution, Administration and logistics and Command. The last one is the most important, he said.

“Someone’s got to be a leader,” he said. “And a leader’s not just a leader. A leader is also a deliverer of hope. Someone that can convey a message—to the employees, to the board, to your shareholders, to your franchisees—of, ‘You know what? This is the goal. This is our vision. This is how we’re going to get there. Do we all agree? And if we don’t, let’s get to some consensus.’ A leader also a deliverer of hope with resources. In other words, if you don’t have the resources, go out and find how to get them, whether it’s through partnerships or investments or whatever it is.”

Despite the uncertainty in the industry and the world today, Russell is still bullish on RLH and plans to make this final public performance a rousing success.

“We have a great team, good senior leadership,” he said. “We have a good board of directors, we’re a publicly owned company. I’m looking forward to taking it to the next level.”