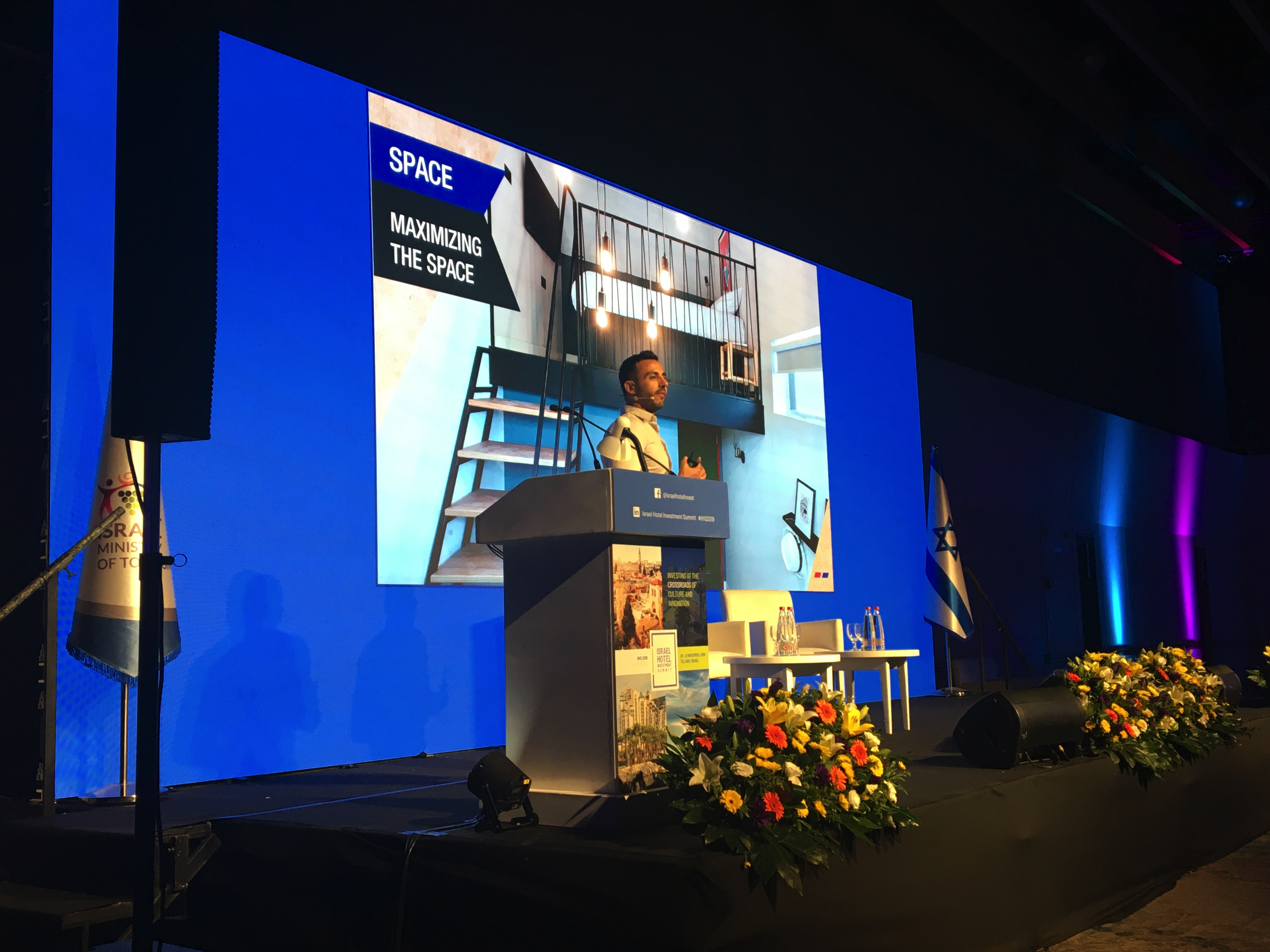 Katherine Doggrell, editor-in chief/EMEA region, will be posting her thoughts on the week’s regional news events each Friday, beginning December 6, 2019. Here, a preview of what is to come as she comments on the recent Israel Hotel Investment Summit (IHIS) hosted by Hotel Management magazine’s parent company, Questex, and the Israel Ministry of Tourism, as part of the International Hotel Investment Forum (IHIF) series, and other recent news.—Stefani C. O’Connor, Editor-in-Chief, Questex Hospitality Group

There is comfort in numbers, in being surrounded by like-minded people in a shared vision, and a conference is a great place to feed a cheery hive mind. But you can keep people safe in a meeting room all you like, events over the past year or so have come with a side of concern, with whispers about whether the market has peaked, about whether the hatches need to be battened down.

Not so last week’s Israel Hotel Investment Summit in Tel Aviv, where enthusiasm started high and held on strong. And why wouldn’t it? The sector had seen 15 percent growth in RevPAR year-to-date, said Thomas Emanuel, director, STR. The Israeli economy was “very vibrant and dynamic,” growing at around 3 percent per year growth, much higher than any other advanced economy, added Dr. Leonardo Leiderman, chief economic advisor, Bank Hapoalim. To crown the piece, Amir Halevi, director general, Israel Ministry of Tourism, pointed out Israel was “not only the Holy Land, it’s a tourist destination, with bars and restaurants”. And, he said, while Europeans were freezing their way through the winter, Eilat was hot. Case closed.

Not entirely, for Israel’s is an unbalanced boom, dominated by luxury. We would all be so lucky, you might think, but, with budget airlines bringing in budget travelers, hotels were likely to start missing out and Russell Kett, CEO, HVS London, expressed his hope that the young nation would evolve to attract more global investors and the signs were there, with Meininger entering the market in Tel Aviv.

The company, which is getting ever closer to new ownership, heralds an evolution not only in room stock, but in how the sector addresses investors. Israel’s fondness for luxury is not driven by the vanity of its investors, but by high land and other costs forcing a product that brings in the rates. The Summit heard that even this wasn’t enough, with residences required alongside to fund developments.

Meininger’s non-executive chairman, Navneet Bali, has long been banging a drum which other hotels will have to start listening to—that of measuring performance by square metre, not bed. Only by looking at what every inch of your hotel is doing can you bring a bit of variety to your portfolio. The success of his strategy is likely to be reflected in the group’s sale price.

While Israel tries to embrace hostels alongside marble foyers, it faces a challenge that is familiar the world over: the consumer not only wants an array of price points, it wants experience, whatever the price point.

As Rami Ohana, co-founder of The Post hostel brand, told delegates: “The new tourism is more intuitive, it’s more short visits, to feel the city. We are trying to make the tourism we offer relevant to the city we are in more yoga in Tel Aviv and more hummus making in Jerusalem.”

Experience is all, as even the established players have noted. Ronen Nissenbaum, president and CEO of Dan Hotels, told us 74 years into the company’s history, the group had seen a shift in consumer demands and, in its Link brand, was looking to address them, with experiences, edgy art and co-working spaces, which not only addresses the needs of hotel guests, but also the surrounding community.

From bunk beds to four posters, experience is delivered only one way; by people, and here, Israel, with its low unemployment, was suffering from the same issues as many other markets around the world. Joseph Fischer, owner, Vision Hospitality & Travel, told us: “Young, talented Israelis prefer to work in high-tech start-ups, make good money and hope for an exit.”

He added: “It’s the land of miracles where Jesus walked over the water and made the miracle of the five loaves and two fish. We shall find a miracle for this.”  But the miracle is the same the world over, not just in the land where water became wine: the need to persuade people that the sector offers a fulfilling career. If you’re reading this, the chances are you’ve already realized this. It’s time to spread the word.

Comment: The issue of fire/life safety is one which has been perplexing the authorities, the hotel sector and any number of neighbors since Airbnb’s inception, with one CEO telling this hack that an incident such as that in California was, sadly, only to be expected.

But can Airbnb prevent it? It’s unlikely. Any house has the potential to become a party house, much as any parent can be fooled by the protestations of a child that homework is front of mind while planning a weekend away. Airbnb is launching a new 24/7 “Neighborr Hotline” so that, it said, “anyone can call us anytime, anywhere in the world and reach a real person at Airbnb.” Long overdue and it would be a fair guess to say that responding to parties was already well covered by police and neighbors. After the fact it said it would ban hosts and potential guests, powers it already has.

There is one clear way in which Airbnb could ensure, pretty much, that party houses are a thing of the past and that would be to return to the old-school, homespun ways of its inception and offer only properties that are shared with the host. The platform and its rivals have moved on since then, with professional investors now viewing the returns from the sharing economy with some delight—in some cities the yield is much higher than traditional rental.

Only when Airbnb opens the books ahead of its move into the public eye will we know the true makeup of the platform and only then will we see the likely impact of forcing the hosts to stay onsite and actually host. The platform could find itself significantly reduced in size if it does.

Comment: The case made over and over at Thomas Cook Group was not one of a company outmoded, but one dragged down by its massive debt—the interest alone was £150m—accrued under past leadership.

The company had created brands that appealed to the marketplace and, with its property fund at LMEY, was putting its money where its mouth was. Its collapse did not, the recent Questex MR&H Conference heard, mean that the tour-operator model was broken.

What hotels in Spain, Turkey and elsewhere that Thomas Cook served have found, at speed, is that the company certainly knew how to fill beds, and groups, such as Orascom, must now look at Fosun and see whether it can deliver as well.

Without wishing to plump its pillows, Fosun has, in Club Med, one of the largest ski brands in the world and may well know what it’s doing. Thomas Cook’s brands bring the sun to warm those times when the skiing isn’t so great and create a round-the-calendar demand for Fosun. It remains to be seen what Fosun will suffer as a result of the liquidation (as of June 30 its holding in Thomas Cook was worth £37.6 million), but, as TSSA General Secretary, Manuel Cortes noted, £11m for the brands is a pretty decent present.

Comment: The farrago over the business-ratings system in the U.K. has been bubbling into steaming since the last revaluation came into effect in 2017, exacerbated by an increasingly complex system that was married to an under-funded Valuations Office. Throw in rising costs from staffing and the startled pound and the UK high street has started to hollow out.

But before you start chuckling over yet another bother the U.K. has got itself into, it is best to note that the system itself was ticking along just fine until it started to be seen as a route to easy cash and easy votes and this need not be something unique to the U.K. As the global downturn starts to move from rumor to reality, governments will be looking to bolster their tax coffers and hotels, with their glossy fronts and comfy beds are likely to shoulder the burden.

A written submission from UKHospitality to the select committee said that hospitality paid 11 percent of business rates yet made up 2.5 percent of business activity. The sector is growing in profile around the globe, to the delight of investors, but UNWTO statistics highlighting that 10.4 percent of global GDP came from travel and tourism in 2018 mean that the goose that lays the golden egg may see its nest emptied. Bed taxes are on the increase. Hotels must be wary that tax systems are keeping pace with the growth in the digital economy and everyone is paying their fair share, big and small.

Comment: It can’t have been the greatest October on record for Meliá Hotels International, seeing Elegant Hotels Group consumed by Marriott International after its own failed takeover attempt in 2017. The larger of the global operators, who could normally be found happily ensconced with the business travelers, have now discovered—thanks to their loyalty programs—that there are such things as resorts and those with a heritage in sun by the sea can now expect increased competition for customers and sites.

The good news for Meliá is, like local rival NH Hotels Group, the Eurozone crisis caused it to work on its debt, spread its portfolio into urban markets and upgrade its room stock, which has given it an edge when competing in the busy markets of the Mediterranean, and means diversification when beachside competition knocks.

With a global economic tightening on the way (we’re not saying “downturn” just yet) the group has been reassured by the ability of its digital booking system to drive guest stays, protecting it from much of the fallout from Thomas Cook (sadly it doesn’t also have its own airline). It must now look to its loyalty program to protect it from resort interlopers and, in a move that could cheer its share price, consider some of the M&A that has been buoying its rivals.