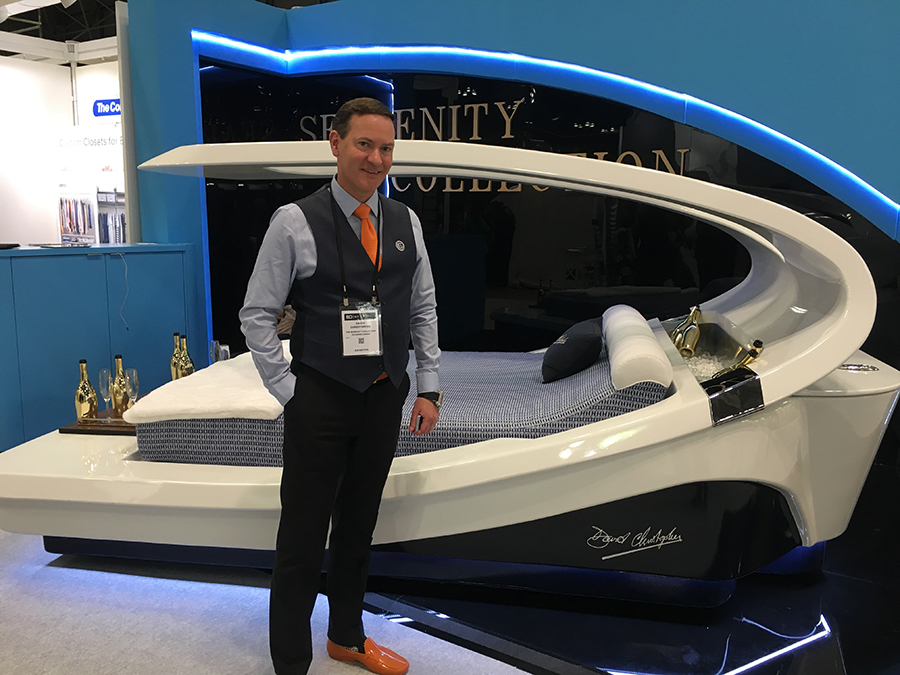 NEW YORK — The Boutique Design New York and HX: The Hotel Experience Powered by AAHOA conferences, held here at the Jacob K. Javits Convention Center of New York, brought thousands of attendees and hundreds of exhibitors to New York City to see and show off the latest in hospitality products and design. Here’s what we learned on the trade-show floor.

Fabric Innovations is expanding its portfolio to include blackout shades that are big enough to be full wallcoverings in their own right. “We have a lot of draperies now that have one full [image] across the width of the room,” founder and president Deborah Herman told Hotel Management during the events.

The drapery on display at the company’s booth is a “four-pass” design, part of a major shift in the way blackout curtains are made. “It’s no longer done by glue or adhesive,” Herman explained of the process. Instead the company uses head adhesion, bonding material together at the fiber level. “So now you won’t have the glue or the laminate or the pin holes that are created by foam adhesive,” she said.

A year after launching its “smart chair,” the Samuelson Furniture team returned to the basics, rolling out a new Phorm credenza in walnut with a flat-cut cathedral pattern spiral design in a metallic finish that company president Lawrence Chalfin described as a Fibonacci sequence—each piece of the pattern building on what came before.

The company also launched a new settee with a walnut base and back, upholstered seat and arms with a floating upholstered panel. “This would be for a public area or a suite,” Chalfin said, adding that the unit also would be good for a cocktail lounge.

For the company’s upcoming 85th anniversary, Samuelson is updating its branding, with the face of cofounder Samuel Chalfin (who started the company in 1935 with his own father Harry) now included in the logo.

Paradigm Trends, meanwhile, is celebrating its 35th anniversary, and owner Jeanne Lissak is using the occasion to celebrate the connection her mother, Bette Lissak, forged with India when she founded the company in 1984.

The company is launching new resin products meant to look like ceramic—but more durable than the real thing, Lissak noted. On the flip side, after 20 years of working with faux leather, Paradigm now is selling desk sets and door hangers made from the real thing.

And to keep up with the trend of maximizing wall space, the company is launching large wall-mounted hooks for hanging anything from bathrobes to bags, made of metal with real marble at the end.

Designer David Christopher launched the Searenity Collection’s debut product here at BDNY. Designed for poolside cabanas at luxury resorts, the Sovereign Lady bed unit features a minibar, a rotating base so guests can adjust their bed as the sun moves across the sky, a retractable fabric canopy and a misting system fed by melting ice from the minibar.

Peel-and-stick removable wallpaper company Tempaper is expanding its collections to include floorcoverings, with washable contract-grade nonslip vinyl tiles that can be removed and replaced as needed. The tiles can be used indoors or outdoors, according to digital press designer Ryan Weber, and—because they offer some cushioning—are good for high-traffic areas.

The company also is promoting customizable designs for individual spaces and is selling some options by the foot or yard rather than the roll.