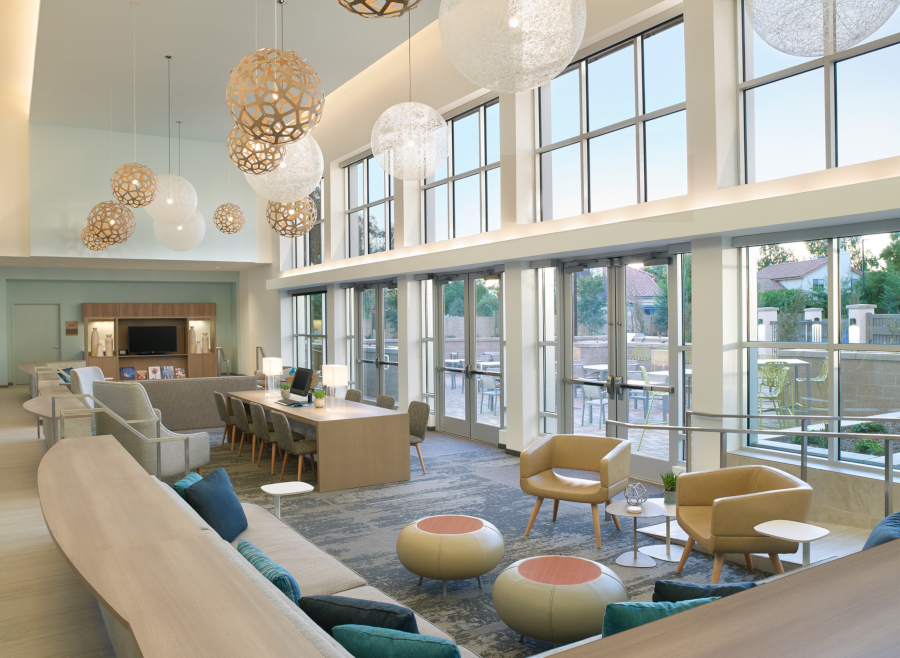 Those numbers are good news for companies like Extended Stay America, which set out on a new venture late last year in order to better capture growing demand in the segment—to the tune of 5.6 percent during the first quarter versus the overall U.S. hotel industry’s 2.4-percent growth, according to The Highland Group. Historically, Extended Stay America owned all of its hotels. Now, with its new franchise arm, the company has 74 franchised hotels with 7,516 rooms in the portfolio in addition to its 553 owned hotels with 61,486 rooms.

“We wanted to fill in the gaps in our portfolio in local markets,” said Jim Alderman, chief asset merchant of the hotel brand. “We took a look and saw 300-plus tracts from STR and said why not feed that growth? We have a robust system, and the segment is named after our brand. The logical next step is to expand the footprint to satisfy guest needs.”

“The demand for extended stay has changed and grown. Whereas these properties originated in suburbs and near airports, evolving guests’ needs have caused us to move increasingly into urban and ‘surban’ locations,” he said, adding that innovative building models and prototypes have enabled these hotels to break into and thrive in urban markets. Hilton, for one, has tapped into modular construction, adaptive reuse and multibrand builds to support continued growth of its extended-stay brands.

“These strategies empower developers and owners to continue to provide the space, amenities and unique features our guests want even in traditionally high-barrier-to-entry markets like San Francisco, Chicago and San Antonio,” Colling said. For example, the hotelier recently opened the Home2 Suites by Hilton San Francisco Airport North using modular construction, which allowed it to go from groundbreaking to opening in 16 months, a fraction of the standard time for the Bay area. In Chicago, Hilton opened its first tri-branded property that combined Hilton Garden Inn, Hampton by Hilton, and Home2 Suites by Hilton, allowing for minimized costs by sharing construction, zoning and operational costs.

“While new supply is booming in all chain scales, extended stay offers lower operating costs, facilitating higher profitability. The performance of the extended-stay product benefits from increased demand for temporary housing from a confluence of factors,” Hoffman said.

Drivers for the segment include natural disasters such as wildfires, flooding and extreme storms, particularly in the Southeast, Midwest and Western U.S., which create immediate demand with long-lasting impact, he said. “Additional drivers include employee relocation, training as new retail and hospital facilities open, housing for construction crews as aging infrastructure is updated, as well as the increased demand in the government and military segment,” Hoffman added.

Alderman agreed that demand from construction work is a key market driver when leaders consider adding a property. The company also looks for markets with a large health-care hub, such as a regional center or a Department of Veterans Affairs hospital, that will bring in a steady number of transient workers. Additionally, tech companies are big for business, often bringing in temporary workers to finish projects—and in the meantime, those employees need a place to stay. The average length of stay at an Extended Stay America property is about 20-plus days, according to Alderman.

For Hilton, whose average length of stay at Homewood Suites is 6.3 nights and 5.9 nights at Home2 Suites, the demand for the product is all about a shifting demographic of guests, according to Colling. “While it has always been popular among business travelers, the growing trend of ‘bleisure’ has altered the type of traveler looking to stay at these types of properties,” he said. “And, now we see that extended-stay options are being sought after for pure leisure travel more and more often.”

Whatever the reason guests are drawn to extended-stay hotels, sources said their craving for the segment isn’t likely to be satiated anytime soon—as long as hoteliers continue to cater to travelers’ wants and needs.

“As long as we continue to stay ahead of guests’ needs and pay attention to changing trends, such as the development of green alternatives and more personalized technology features, the extended-stay market will remain in demand as a top choice for both business and leisure travelers alike,” Colling said.