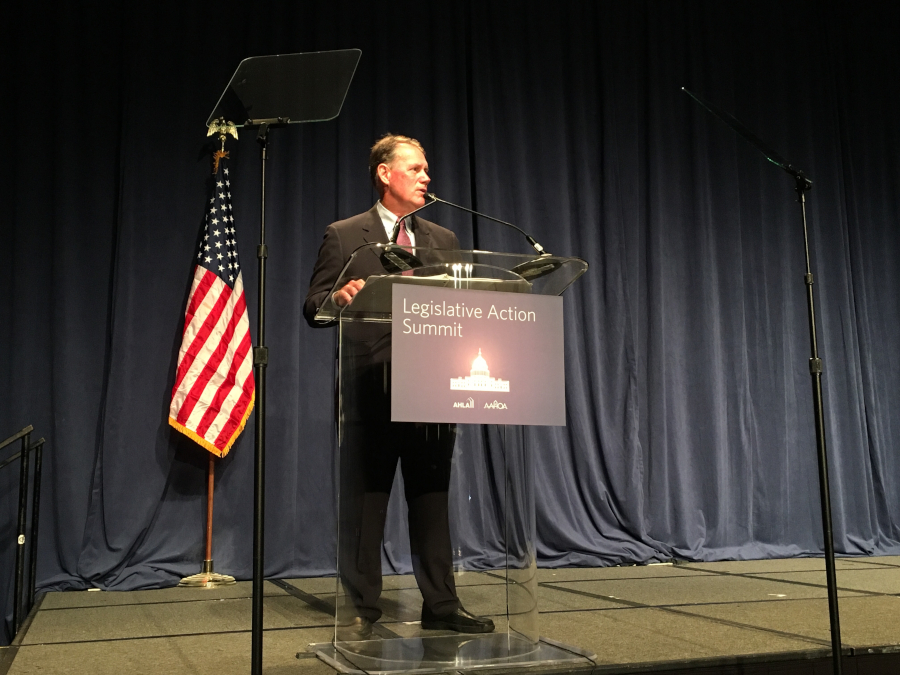 WASHINGTON, D.C. – The American Hotel & Lodging Association and the Asian American Hotel Owners Association gathered at the Capital Hilton in Washington, D.C., Tuesday for their 2019 Legislative Action Summit. Leaders in the organizations spoke to attendees about the issues facing the hospitality industry, preparing them to head to Congress today and lobby for legislation related to short-term rentals, Brand USA and online booking scams.

“We are business leaders in our communities, and we have a responsibility to help our elected officials do right by our friends, neighbors and our communities,” said Jagruti Panwala, chairwoman/president of AAHOA, in her opening remarks. “We must educate lawmakers and stand up to legislation and regulatory policies that hurt our employees, our businesses and our communities.”

Local governments across the country have taken steps to limit the proliferation of short-term rentals, like those sold on home-sharing sites like Airbnb and HomeAway. These companies, however, are arguing the Communications Decency Act, Section 230 gives them immunity from any penalties these cities might place on them for hosting listings that these laws declare illegal.

To counter this argument, U.S. Rep. Ed Case, D-Hawaii, introduced the Protecting Local Authority and Neighborhoods Act on Sept. 6. “What my bill says is ‘No, if you are hosting on your site and advertising on your site an illegal vacation rental, you can’t get off the hook for that,’” Case told Hotel Management. The bill specifically addresses Section 230 and says the protections afforded to online platforms do not apply to local and state governments looking to enforce their own short-term rental laws around zoning and land use.

“This is not a broad rewrite of the internet, as you may hear,” said Troy Flanagan, SVP of government affairs and industry relations for AH&LA. “This is focused on preserving the local authority of government to address what makes sense for their communities.”

Case said the bill has seen “very good reception” in the short term since he introduced it. So far, U.S. Reps. Peter King, R-N.Y., Ralph Norman, R-S.C., and Raja Krishnamoorthi, D-Ill., have signed on as co-sponsors. Should the bill pass in this particular Congress, Case estimated it would probably go into effect in about a year and a half.

Established by the Travel Promotion Act of 2009, Brand USA is a public-private partnership created to promote travel to the United States. According to data presented by Chirag Shah, VP of government affairs at AAHOA, Brand USA returns an average $25 to the U.S. economy for every $1 spent. “Could you imagine if every single government program had a 25-to-1 return on investment?” asked Shah. “There would be no need to pay taxes, the White House up the street would probably be plated in gold.”

Brand USA primarily runs global consumer marketing campaigns in 14 core countries. These efforts include everything from social media campaigns to short movies that screen in museums and science centers around the world. Mike Fullerton, senior director of public policy at Brand USA, said that over the past six years the organization has increased visitation an additional 6.6 million visitors. Those visitors, he said, spent $21.8 billion, helped add 52,000 incremental new jobs each year and had a $47.7 billion total economic impact.

Only authorized through 2020, Brand USA’s future is uncertain. Funded by private investment as well as visa fees collected by the government, the bill originally required no taxpayer money. However, the 2018 budget passed by Congress, which diverted those fees to pay for other things, complicates the matter. Now, renewing Brand USA means increasing the national deficit, increasing revenues or cutting spending.

The third major piece of legislation the AH&LA and AAHOA want their members to lobby about aims to stop online booking scams. The appropriately titled Stop Online Booking Scams Act of 2019 makes it illegal for third-party hotel reservation websites to advertise or sell rooms if they state or imply they are a hotel or are affiliated with a hotel. The bill would fine violators and shut their websites down, give more power to state attorneys general to pursue these violators and make it easier to report them to the Federal Trade Commission. Sens. Steve Daines, R-Mont., Klobuchar and Deb Fischer, R-Neb., have sponsored the bill in the Senate and Reps. Welch, Bilirakis and Lois Frankel, D-Fla., have sponsored it in the House.

Brian Crawford, EVP of government affairs for the AH&LA, explained that when guests book through these sites, “they might not get an [Americans with Disabilities Act-] accessible room, they might not get the oceanview room that they want, there could be hidden fees involved.”

Actionable Intelligence: The Next Best Thing to Reading your Guest’s Mind