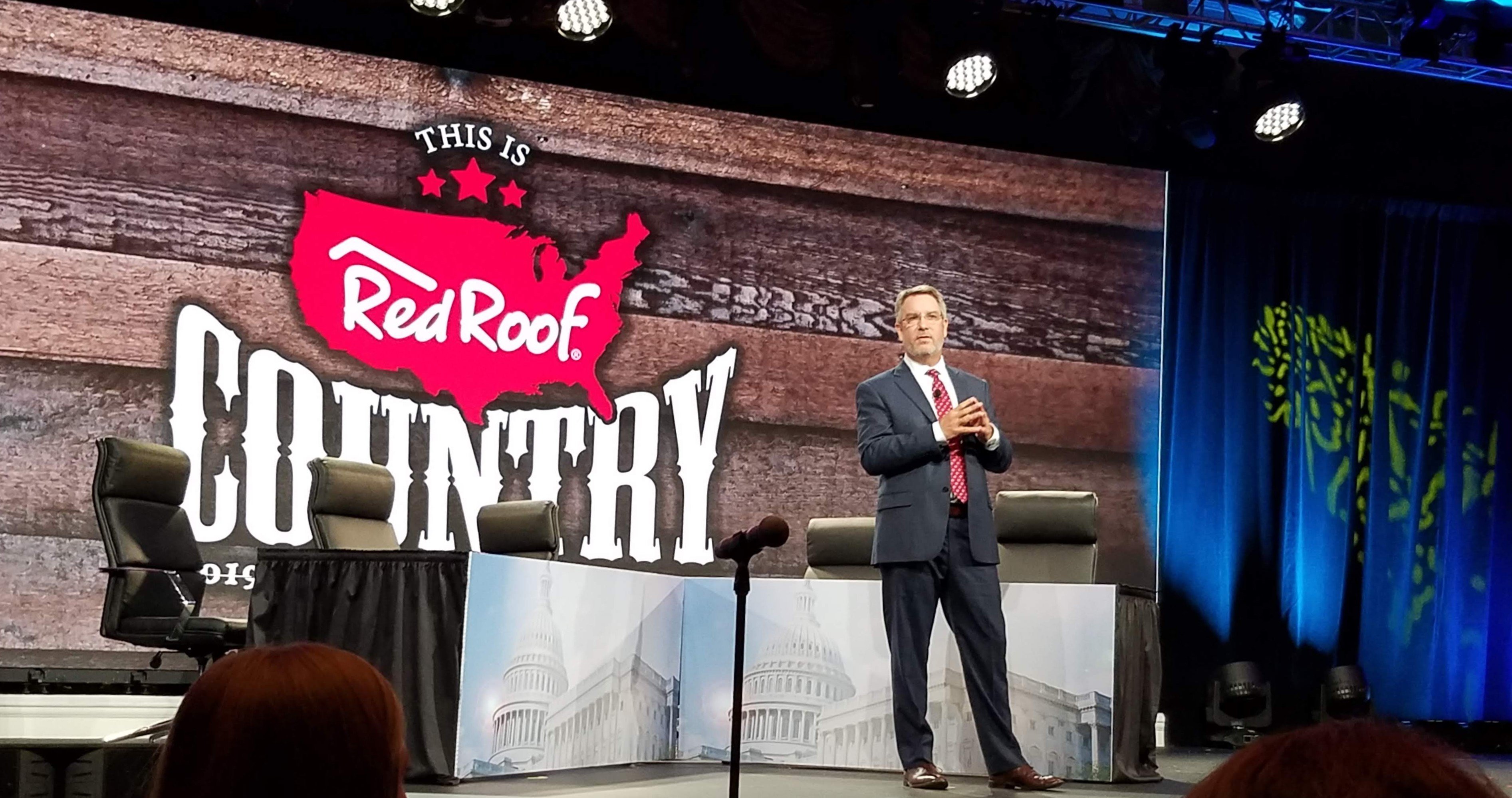 NASHVILLE, Tenn.—It’s been about a year since Red Roof Inn expanded into soft brands with the launch of the first Red Collection hotel in Chicago and also announced plans to gain a foothold in the extended-stay segment with HomeTowne Studios. So, not surprisingly, the two growth strategies created the main focus during the company’s conference being held here this week at the Gaylord Opryland.

Red Roof President Andrew Alexander told several hundred attendees gathered at the hotel that “2018 was a fantastic year for our economy and 2019 looks to be even better,” as he kicked off the opening general session. “That’s part of what’s fueling our expansion into new brand extensions and global markets.”

The brand extensions are part of the company’s new master brand and sub-brand strategy, said Alexander. The Red Collection now has three properties in Chicago, New York City and Springfield, Ill.; and the company is pushing the soft brand for further growth. During the conference, Chief Development Officer Phil Hugh announced that through the end of the year qualified franchisees who open a Red Collection hotel will not have to pay any royalties for the first five years the property is open.

HomeTowne Studios, meanwhile, has 54 hotels open a little over a year after launching. The brand has reported RevPAR increases of 20 percent from hotels’ pre-rebranding numbers in 2016. “Compared to the comp set in the extended-stay space, we’ve improved by 12 percent,” Alexander said, calling the segment  “hot” and a “strong opportunity for franchisees ready to expand their portfolios.”

In terms of international expansion, Alexander expressed caution. “We expand where we find the right partners,” he told attendees, adding he is not interested in “racking up numbers” just for the sake of rapid growth. The company, which has several properties in Canada, Brazil and Japan, will open its first Red Roof Plus in Calgary this year.

“It’s all about smart growth,” Alexander said, noting the company is growing at a faster rate than its comp set. Last year, the company’s unit growth was 13.3 percent, not including the addition of HomeTowne Studios. (Factoring in those two brands, said Hugh, that growth is 24.4 percent). In contrast, he asserted Choice Hotel International’s economy brands reported 2 percent unit growth (not including the Woodspring acquisition, and Wyndham’s economy brands reported unit growth of less than 1 percent, not including the acquisition of La Quinta or the divestment of Knights Inn. “1 [percent] to 2 percent growth isn’t bad,” said Alexander, “but we like 13 percent a lot better.”

The team shared some optimistic statistics during the opening session. In the 12 months ending in June in total revenue, Red Roof’s system has grown to more than $700 million, Alexander said. “That equates to over 11 million room nights at about $64 ADR, and 5.5 million stays.”

Hugh noted the “upward trend” in multi-unit ownership since the brand’s re-alignment. “In 2013, [fewer] than 10 percent of our franchisees owned multiple units,” he said. Today, he estimates 25 percent of franchisees have two or more Red Roof-flagged hotels. “We have 58 multi-unit owners today. It seems like every month, one of our existing owners is expanding with us.” At the same time, he added, the company is also averaging 65 new franchisees each year.

Like many companies, Red Roof has been investing in next-gen technology to streamline operations and attract more bookings; however, Red Roof also suffered a system crash that affected front- and back-of-house operations. While migrating data to  Microsoft’s Azure cloud computing service, the company’s RediStay platform went down. “It’s no exaggeration to say it was a disaster,” Chief Information Officer Ted Hutchins said. “We couldn’t check a guest in. When someone called, we had to manually process the reservation.”  In a world that relies on electronics, he added, the company was in the dark. “Around here, we still refer to that as Black Tuesday.”

The company learned from its mistake and adjusted the transfer strategy. The data was successfully transferred to Azure last month, and Hutchins said the new service will provide more storage and faster processing. “We have the ability to run RediStay in multiple locations to balance the load of data, so lots of different people can be working on RediStay at the same time without affecting the processing speed for everyone else,” he explained. And to prevent another crash like February’s, the system will now have redundancy built in. Should the server in one location fail, the data will be diverted to another location and business can continue as usual.

Last year, Hutchins and his team began designing RediStay 5.0, a new check-in interface that should streamline the process to under a minute. “Like the cash register at a fast food restaurant, it does most of the work for you, so the training can be more about customer service and less about the computer,” Hutchins explained. “We’re beta-testing the new front desk interface in the third quarter of this year, with rollout planned for fourth quarter.” The company, he added, also is rolling out self-check-out options for guests and will soon have self-check-in kiosks as well.

The last new tech development is the Payment Wizard credit card authorization process. Instead of authorizing a credit card, Payment Wizard charges the credit card at check-in instead of check-out, paying for the reservation in advance so owners won’t need to worry about declined cards at the end of a stay. All 100 corporate-managed properties, and 10 franchised properties, currently are testing the system, Hutchins said, and the company will be rolling it out right after brand conference.

“Every generation lives in a time of change,” Alexander said. “It’s inevitable. The only difference is the speed at which that change occurs.”

The World’s Most-Visited City Is Bangkok