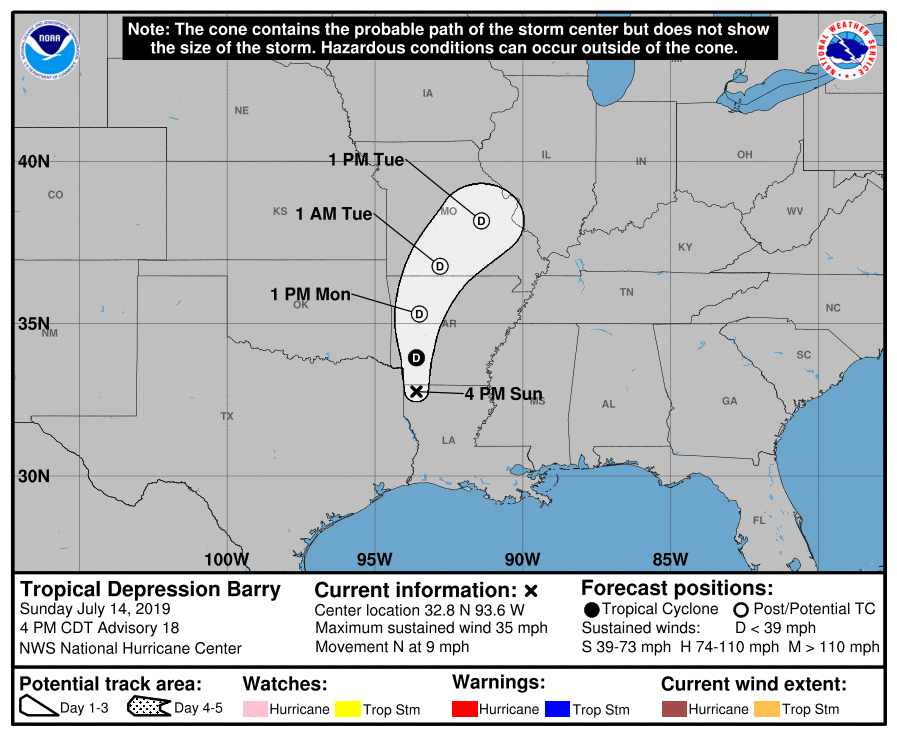 A slow-moving storm threatened New Orleans over the weekend, and as Hurricane Barry was downgraded first to a tropical storm and then to a tropical depression, the city remained vigilant and cautious.

New Orleans Mayor LaToya Cantrell gave the all-clear for the city Sunday afternoon. “We absolutely made it through the storm. Beyond lucky, we were spared,” she said in a public briefing. “It seemed as those [rain] bands moved closer to New Orleans, it seemed to just go around us.” Louisiana Gov. John Bel Edwards said in a press briefing Sunday that 93 people in 11 parishes were rescued during the storm, and there had been no fatalities. In a statement, the city’s tourism board emphasized that New Orleans was “back in business” while offering support for neighboring communities that had been more severely affected by the storm.

While the storm did not unleash the feared flooding across the Crescent City that had been predicted, tornado and flash-flood warnings continued Monday as the storm moved north to threaten other towns and communities across the region. Much of Louisiana and Mississippi were under flash-flood watches, as were parts of Arkansas, eastern Texas, western Tennessee and southeastern Missouri.

The storm did affect bookings at some properties. Corey Carter, a front-desk agent at New Orlean’s Chateau LeMoyne – French Quarter, A Holiday Inn Hotel, said that the hotel experienced a few cancellations before the storm. But when the storm finally reached the city, he described it as little different from an average rain storm.

Ahead of the storm, Marriott International issued a statement that hotels in the affected area would be “reviewing their cancellation fees,” and that details could vary by hotel.

On Friday, with the storm advancing on the city, visitors were asked to “shelter in place” in their hotels if they did not have confirmed airline reservations for flights out of the city. The director of Louis Armstrong International Airport said long lines started forming early on Friday as visitors sought early departures, and flights to and from the airport were canceled across the board on Saturday. Kristian Sonnier, VP of communications and public relations for the city’s tourism board, warned at the time that people who did not fly out in advance would not be able to shelter at the airport. Cori Jackson, a front-desk supervisor at the Holiday Inn New Orleans Airport North, told Hotel Management that canceled flights drove up bookings for the weekend, and the hotel was completely sold out.

According to reports, only one major convention, the annual meeting of Delta Sigma Theta sorority, ended early. Similarly, a Rolling Stones concert scheduled for the Mercedes-Benz Superdome was rescheduled from Sunday to Monday, potentially affecting hotel booking plans.

Hospitality Communications in the Digital Age