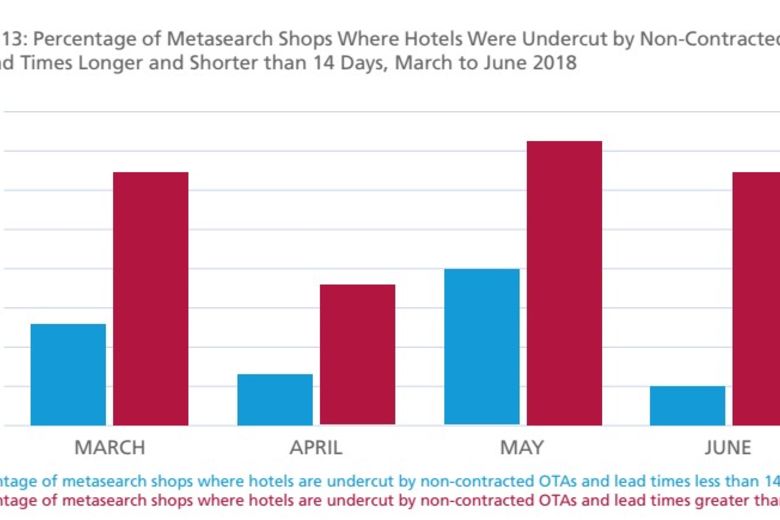 Fornova and EyeforTravel’s white paper has uncovered that the greatest factor impacting rate integrity is contracted wholesalers, which are selling inventory to Online Travel Agencies (OTAs) that do not have direct agreements with hotels. This is resulting in lost market share and revenues for both hotels and partner OTAs. The depth of this is revealed by Fornova monitoring of nearly 10 million shops made through metasearch engines in 2018.

Contracted OTAs on average undercut hotels in 14% of the shops with leads times less than 14 days and in 26% of shops with leads times above 14 days. However, when it comes to non-contracted sellers, the share of shops that were undercut doubled or trebled, depending on the time frame. 39% of hotels’ direct rates advertised on meta were undercut by these actors for stays less than 14 days rising to 74% for those with lead times above 14 days

Furthermore, non-contracted OTAs are undercutting more aggressively than contracted counterparts. On average, OTAs working under agreements with the hotel posted rates that were 5% to 6% lower than the direct rate. This jumps up to 10% for non-contracted sellers advertising for lead times under 14 days and 11% for lead times above 14 days

The majority of this is coming from wholesalers moving on inventory, which is then posted by other sellers. Fornova CEO Dori Stein estimates that 40% to 50% of hotel inventory contracted to wholesalers is leaked online, despite the fact that they negotiate for static rates, based on the fact that those rates will be opaque to consumers who are purchasing the room as part of a package with other services included.

The growth of APIs has allowed more players to access and market inventory to more partners but this is not necessarily in the hotel’s best interest. Hotels need to have a view on who is selling their inventory and at what price to protect their brand’s integrity and also to prevent their prices being consistently undercut by wholesalers who should not be placing inventory in this manner. Failing to do so means hotels cannot understand the true effectiveness or cost of their marketing and sales efforts and for consumers to shift away from seeing value in making a direct booking.

The issue is ongoing for Thailand-based Dusit International, which operates primarily in Southeast Asia and which maintains static contracts with a multitude of traditional wholesalers. “There is crossover between all of the different players on various channels and that makes it very hard to maintain rate integrity,” said Chatchai Pongprapat, assistant vice president, revenue management. The company’s solution has been to partner with Fornova, which polices the rates and in turn, Dusit tackles rate disparities one-by-one as they arise, while also reconsidering the terms and conditions of individual static contracts in order to keep the hotels from being undercut.

However, resolving each rate discrepancy doesn’t necessarily remedy the issue in the long-term. The third-party vendor will rectify the issue at the time it occurs says Stein, but without contractual obligations, the partner isn’t necessarily obligated to maintain parity in the long-term. Plus, they will often change the rate in the local market where the hotel’s revenue or distribution team is located, while leaving incongruent rates in international markets as it’s more difficult for the hotel to verify that the changes have been made. According to Fornova CEO Dori Stein, “when hotels have a bad parity situation and they’re on meta, they’re effectively paying to tell the world that their brand.com rates aren’t the cheapest.”

For more on how metasearch is shaping the digital accommodation market, download the free white paper now.

This white paper, made in conjunction with Fornova, gives real-world data on hotel, wholesaler and OTA bidding strategies, alongside consumer behaviours, and meta success metrics. Use these to understand the channel, the competitive landscape and build a winning strategy!

Learn the following from this white paper: